When it comes to bladder weakness and incontinence, many people suffer in silence too uncomfortable to tell anyone. One US study reported that on average women wait 6.5 years and men 4.2 years after beginning to experience their symptoms before they seek advice. The ramifications of this delay on both physical and emotional well-being is immense. High levels of depression are noted amongst sufferers.

So, what causes the bladder to stop functioning correctly, and leaking when it shouldn't?

Common causes include pregnancy/childbirth and ageing with twice as many women suffering than men. Between 25-30% of women aged between 45 and 65 are thought to suffer with some form of incontinence. However, Urge Incontinence is said to affect the same amount of men as women, reaching as many as 40%. The NHS estimates that between three and six million people in the UK suffer with incontinence of some kind. The most common forms of which include Over-active Bladder (the need to urinate more than 8 times in a 24 hour period), Stress Incontinence (the need to urinate when coughing, sneezing, laughing etc.) and Urge Incontinence (the strong impulse to urinate, followed by involuntary urination). 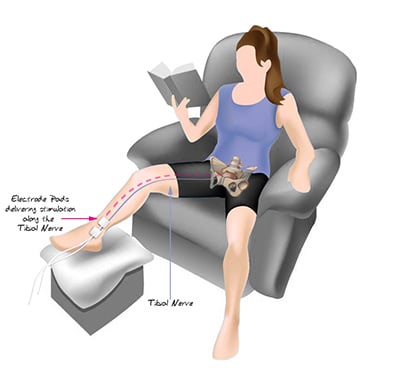 I'm leaking so what's a nerve near my ankle got to do with it?

Let's explore how tibial nerve stimulation, (also known as posterior tibial nerve stimulation or PTNS) works. When the nerves and the brain stop communicating properly to the bladder or bowels they wont function as they should. With PTNS, a small electrical current is designed to imitate the signal sent via our central nervous system, and is passed through the body triggering a muscle contraction. Treatment using small electrical impulses is known as neuromuscular electrical stimulation (NMES) or neurostimulation. The tibial nerve provides a route to the spinal segments, which are responsible for the everyday function of the bladder, bowel and pelvic floor. The mild current passes up the tibial nerve, which in turn manipulates a response in the pelvic floor. With continued treatment, muscle strength is rebuilt, restoring correct function

In March 2010 PTNS was recommended by NICE (National Institute for Health and Clinical Excellence) as an effective treatment for Over Active Bladder (OAB). It's no secret that this is a proven and effective method for alleviating all symptoms of bladder weakness and even eliminating problems completely. However, what does seem to be all the more hush-hush is that there are different ways in which this treatment can be applied.

When searching the internet you'll find the procedure of 'percutaneous tibial nerve stimulation'. This involves having a fine needle electrode implanted underneath the skin, close to the ankle. However, nerve stimulation can also be applied using external electrode pads and Kegel8 is pioneering this form of treatment. Simply placed in close proximity to the nerve, the mild electrical current can penetrate the skin, sending the appropriate signal. This type of PTNS is known as transcutaneous.

Research suggests that almost 80% of people prescribed drugs for incontinence discontinue their use in the first year with up to 17% of these being due to adverse side effects. Similarly, any surgery, regardless of how minor, always carries some degree of risk. With Percutaneous PTNS, adverse reactions can include bleeding, swelling, pain or infection. However, what if we told you that you can apply PTNS yourself? In the comfort of your own home, with none of the associated risks mentioned above?

A study carried out by Glasgow Caledonian University revealed that 48-68% of patients treated via transcutaneous (external stimulation) PTNS saw a marked improvement or cure of their bladder irregularities. This is in contrast to the 60-80% success rate for treating Overactive Bladder using the subcutaneous method (use of a needle stimulator). The study suggests that transcutaneous PTNS has a positive impact and an overall reduction in bladder weakness symptoms, supporting its use as a first line intervention.

PTNS is also believed to be an effective treatment for Faecal Incontinence (FI) which can be an extremely debilitating. In a survey carried out by Gut (an international peer-reviewed journal for health professionals and researchers in gastroenterology and hepatology) it was found that 45% of their subjects receiving transcutaneous PTNS saw more than a 50% reduction in weekly episodes of Faecal Incontinence. So, for those that want to rebuild muscle strength, as well as confidence, PTNS treatment with Kegel8 could help you to do just that.

Tibial nerve stimulation with Kegel8 - for women and men - it's so easy, just take a seat!

So you've learned how to do kegel exercises and you've discovered that when it comes to strengthening all muscles in the pelvic floor, the Kegel8 Pelvic Toner is really revolutionary for both women and men. The Kegel8 Ultra 20 Electronic Pelvic Toner and the Kegel8 V For Men Kegel Exerciser For Men come complete with a probe attachment, as well as four electrode pads. These electrode pads can be used for highly effective tibial nerve stimulation (as shown in the diagram), and are particularly effective when used with Programme 9 on the Kegel8 Ultra 20 or Programme 6 on the Kegel8 V For Men to treat overactive bladder.

Kegel8 Pelvic Toners are developed alongside leading clinicians and are proven to deliver optimum results. By using once or twice daily, you will see incredible results within a matter of weeks.

So, if you want to restore your pelvic floor strength and effectively combat weakness, read more about the Kegel8 Ultra 20 Electronic Pelvic Toner or the Kegel8 V For Men Kegel Exerciser For Men today!