COMEDY AND CONTINENCE – when laughing is no laughing matter 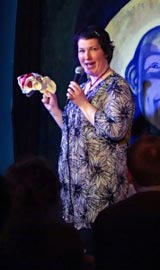 As a Pelvic Floor Physiotherapist not much shocks me – but, realising that a third of my peers wet themselves did. The stats about women’s continence are depressing: 1:3 women aged 35-55 wet themselves;  once they’re over 55 it’s half of us.  Most women never seek help, they just pad themselves up and die a little inside.  And, that pelvic floor muscle rehabilitation completely resolves most cases of simple stress incontinence. Women are usually aware that they have a pelvic floor, and they vaguely know what pelvic floor exercises are – but, compliance is poor.  There’s not much research looking at why that is – but, anecdotally, they are simply too busy doing everything else. So, they put up with it.  Some of us believe that leaking is an inevitable consequence of becoming a mother, or getting older.  Some of us mean to get around to speaking to our GP about our incontinence soon....and just never do. I have a hobby of stand-up comedy and wondered whether using humour might be helpful to break down the taboo that surrounds incontinence after hearing a few women say “oh don’t make me laugh, the tears are running down my leg”.  I noticed that women automatically use humour to deflect the wearing, unrelenting awful reality that is living with incontinence. I simply don’t accept that there is any need to be embarrassed by a condition which affects a third of us.  If we break down the taboo surrounding this common problem then more women would seek help. And, I get it.  Because, I have personal experience – I trashed my undercarriage by having three giant-headed babies.  I understand the crushing horror that comes when you wet yourself on your doorstep (why do house keys hide in handbags?) in front of your nosey neighbours.  And, I know how difficult it is to prioritise the time to doing your exercises – this is my job and it still took me a while to get around to actually addressing my problem.  When I say “a while” I mean about 4 years.  That’s about average.  I did my exercises three times a day and was dry within three months.  That’s also about average. My real concern is the wider health issues which are associated with incontinence. Women who leak when they run will inevitably stop running – that increases her risk of heart disease and other condition caused by inactivity. A third of people who have problems with bowel and bladder control also have clinical depression. Incontinence is associated with sexual dysfunctions and relationship breakdown. And, an unknown number of hip fractures are caused by elderly women rushing to the toilet at night, and slipping in a puddle. So, whilst the immediate worry for a woman with  poor bladder control is the fear of having an accident in public – the long term effect of incontinence on her life is worrying. Perhaps if we professionals told women that the side effect of doing your pelvic floor exercises is having better orgasms then more of us would comply.  The reason for that is that the nerves which supply the muscles which support your bladder also supply your tickly bits.  Handy. I am aiming my sights at the millions of women who don’t seek help.  Through the parties I am teaching them what their pelvic floor is, what it does, why it goes wrong, what exercises might help, and when to seek an assessment - it is informal and not clinical, and it is definitely not show and tell.  No one is asked questions and the jokes are always firmly on me, I have turned myself into a caricature of a woman who’s bits were broken by babies – and, has now fixed them. However, the parties are only reaching 20 women at a time...I need to spread the word more quickly than that. I started using twitter as a training tool – the evidence is that doing your exercises 3 times a day for three months improves simple stress incontinence.  So, when I tweet, you twitch your twinkle.  Follow me @gussiegrips, occasionally I stray into a bit of politics or astronaut stuff, but it’s mostly all about the fanjo. That’s still not enough – so, in a moment of lucidity/lunacy (delete as appropriate) I wrote a solo show for this year’s Edinburgh Fringe Festival.  It’s imaginatively named “Gusset Grippers” and is evidence based practice cunningly disguised as scatological humour. I know nothing about The Arts, so, it’s fair to say that I am somewhat out of my depth and there is a very real possibility that I will spend a lonely August in a basement bar in Edinburgh with only a knitted vagina for company – you don’t want that for me, so, here’s the shameless plug.  Tell your friends, I really need an audience, after all, I’ve gone to the trouble of knitting a vagina prop .... Incontinence is a hidden problem.  It is wrapped up in complicated social, political, health and feminist issues.  It destroys lives and relationships and causes untold misery to millions of people who are suffering needlessly.  All from a condition which is usually, easily resolved. We can break the taboo and change the world, one fanny at a time. You are all coming to see the show, right?

Elaine Miller is a pelvic floor physiotherapist, based in Edinburgh, Scotland.  Her post-grad is in sports medicine, but she turned her back on travelling the world and being paid to touch fit young men after she reduced her undercarriage to rubble by having three giant headed babies in four years.  The pelvic floor and the science of incontinence subsequently became absolutely fascinating to her. Elaine uses humour to break down the taboo surrounding incontinence – through pelvic floor parties and now, a one hour solo show called “Gusset Grippers” which is to be showcased at the Edinburgh Fringe Festival this August.  She is also grappling with social media  and using it as a training tool - @gussiegrips, “when I tweet, you twitch your twinkle”
1 July 2013
699 view(s)
Categories
Tags were not found