The Most Confusing Intimate Areas (according to Google)

Posted in: Womens Health, Kegel8 In The Media, Sex and Intimacy
By Kegel8

Here at Kegel8, we want to have open conversations about sex and intimate health. Without normalising sex, a negative psychological cycle can leave people feeling embarrassed and confused. People become more likely to hide behind tools like Google to help them fully understand the simple biological foundations of life. 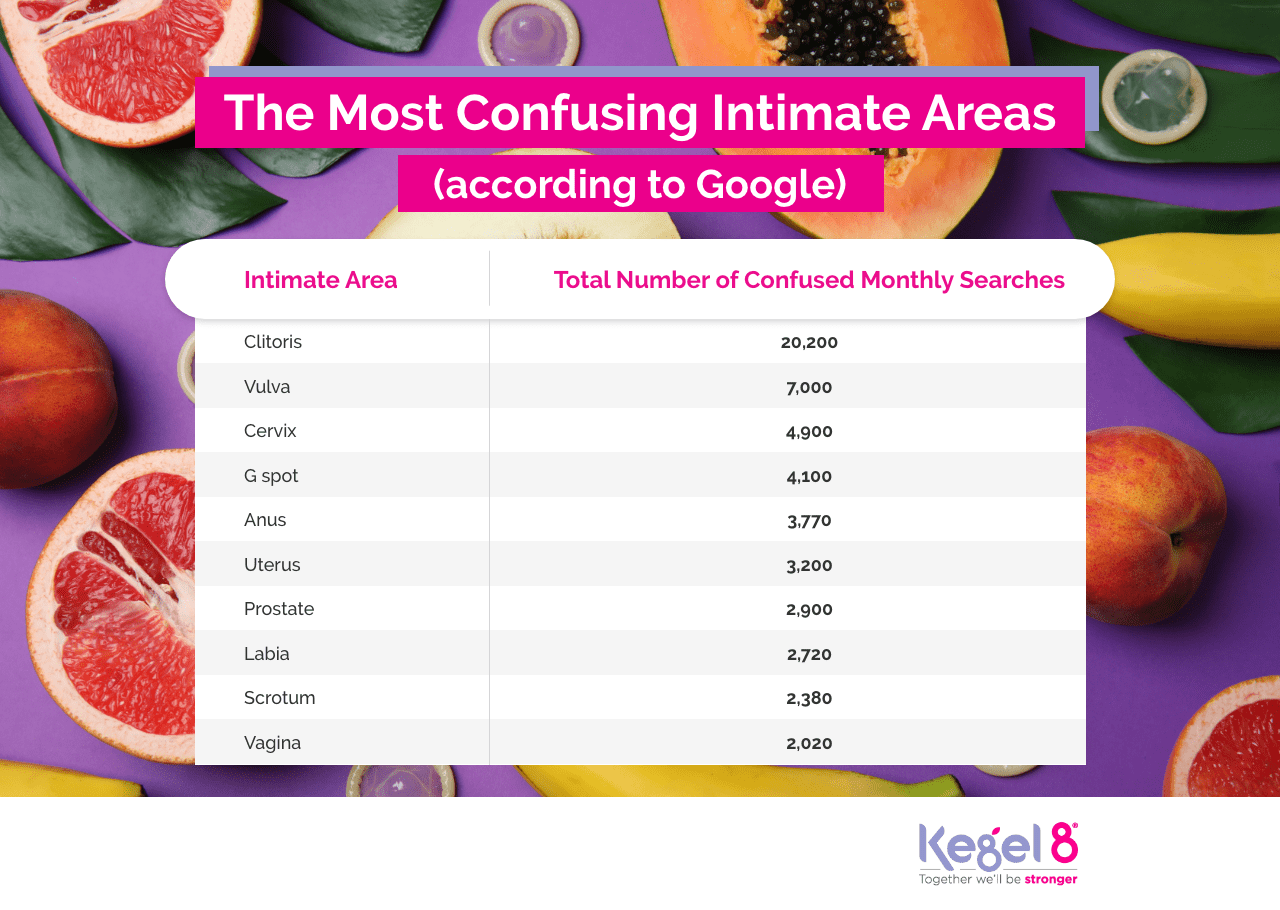 This gave us an idea. To fully understand these feelings, we knew we could use Google Keyword Planner to identify confusion around all male and female intimate areas. On top of that, we could find out just how common these feelings are.

Below you can see which intimate areas Brits are most baffled by:

It seems out of all genders, the public are most confused about female intimate areas.

Brits Are Most Confused by the Clitoris

Clitoris-related questions, like “what is a clitoris” and “where is the clitoris” came out on top with 20,200 searches each month combined.

A survey by YouGov showed similar confusion, with a third of both men and women unable to locate the clitoris.

For those who don’t know, the clitoris is located at the top of the vulva and above the urethra. Having said this, it seems the second most confusing intimate area is the ‘vulva’ itself, with 7,000 Googles for both ‘what is a vulva’ and ‘where is the vulva’ searches combined.

What Is and Where Is the Vulva, Brits Ask

It can be confusing when scientific terminology is thrown about. Especially as the vulva is used interchangeably with the vagina. The vulva includes the vaginal opening, labia majora, labia minora and the clitoris. Whereas the vagina is the muscular tube inside, leading to the cervix.

Other Confusing Intimate Areas Include…

The cervix is another term that people are confused about too, with under 5,000 confused monthly Googles. The cervix is located between the uterus and vagina and plays a role in cleaning the vagina and protecting a pregnancy,

Some unisex intimate areas did make the list including: the G spot and the anus.

For male specific areas, prostate and scrotum seem to be causing the most confusion. The prostate is a gland in front of the anus that helps with reproduction. While the scrotum is the sac of skin that holds the testicles.

We strongly believe by being frank and opening up about intimate areas, we can lead people away from embarrassment and hiding behind search engines for knowledge.

While sex and imitate health can still be seen as a taboo for some, these are the fundamentals of human life. And we should all know about them sooner rather than later. This should never mean you are embarrassed for a lack of knowledge, regardless of age - we all learn at some point!

Kegel8 recorded data from Google Keyword Planner on both ‘what is’ and ‘where is’ searches for 46 female and male intimate areas. These were combined to find the ‘Total Number of Confused Monthly Searches’.